The Sea Eagle 330 Inflatable Kayak with Deluxe Package allows you to enjoy the water in a very convenient package.

It’s a two-person inflatable kayak that’s sturdy enough to accommodate up to 500 pounds of passengers when properly inflated even though it weighs only 26 pounds.

It’s easy to carry, inflate, paddle, and deflate to provide you with all the convenience you need.

The rugged Sea Eagle 330 has a self-bailing drain valve which is very helpful for rougher rides on white water and rapids. It has inflatable spray skirts with rear and front rope handles.

This kayak has 9-inch tubes and an I-beam construction floor and is rated suitable to use on up to Class III whitewater.

Made of extra-thick, puncture-resistant 33 mil K-80 Polykrylar hull and tough welded seams, this watercraft gives you peace of mind that you’re safe on the water.

Our research team found many positive reviews for Sea Eagle 330 Inflatable Kayak and most reviewers claimed that its seats are extremely comfortable, very firm and provide support for the back better than most office chairs, let alone canoe seats.

It’s easy to set up with the foot pump which takes only 35 to 40 pumps to fill each of the three chambers. No air escapes from the one-way valves at all.

A few reviewers commented that it’s really not a professional kayak because it doesn’t track as well.

It’s on the smaller side for two people, is slightly awkward to paddle due to pontoon-like sidewalls, and works much better with a passenger in front.

It would not support both riders very well as its floor would not hold air. Also, there’s not enough legroom for both riders in the kayak.

Most of the kayakers said it’s very stable, very easy to maneuver and there’s no need for any special racks to carry it around.

It performs pretty well in the water. Riders were surprised that it maneuvers much more like a kayak than an inflatable raft.

Its tracking performance is good as there are inflatable canoes that perform much worse. Sitting in the back seat is not a problem because a rider could lean against the back.

It sure beats a car topping a canoe. After you’re done kayaking, just unscrew the valves, roll it up like a sleeping bag, put it in the duffle, and put it back in the trunk.

The Sea Eagle 330 Inflatable Kayak got a high average rating from its reviewers. Its steering and handling are excellent mainly due to the two skegs attached to the underside.

It can be pretty easy to go straight and with some speed with just a little practice. The Sea Eagle 330 is not a speed demon in the open water but it’s greatly maneuverable.

This kayak shines most on streams and small rivers where speed is not really an issue. 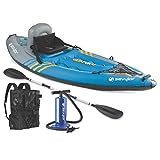 What is a Tandem Kayak? Enhance Your Outdoor Adventures