The Sevylor Inflatable Colorado kayak is both a stable, easy-to-maneuver kayak and a comfortable canoe that’s designed like a traditional North American canoe.

It boasts of ruggedness and rigidity, as well as an Airtight System and Double-Lock Valves to guard against leaks and air loss.

It’s 10’9″ long, has a 3’1” beam, and has a 2-person, 500-pound capacity. Included in the package for the product are oar holders, a removable stern storage, 2 elevated bucket seats with rear storage, D-Rings, tie-downs, a-nylon carrying bag, an instruction manual, and a repair kit.

If you’re looking for a watercraft that’s considered one of the best inflatable kayaks around, but is a canoe at the same time, you may be interested in the Sevylor Inflatable Colorado Hunting and Fishing Canoe.

As a kayak, it’s stable and easy to maneuver, but it’s shaped and styled like a traditional North American canoe.

It’s made of an 8-gauge PVC construction material, covered with 420-denier nylon, and has a durable reinforced fabric in the bottom.

There are D-rings and tie-downs to hold extra gear. This inflatable kayak also boasts of an Airtight System to prevent leaks and Double-Lock Valves to ensure against inadvertent air loss.

Go to Amazon.com to check out the best-priced top inflatable kayaks.

We did thorough research to read as many reviews of this canoe as possible, and we observed that the reviews for this product were mixed. Although most of the reviewers gave it 4 and 5 stars, there were also a number of reviewers who gave it an average rating of 3 stars, and some even gave it 1 and 2 stars.

Here at Top Inflatable Kayak Reviews, we want you to be aware of the good and the bad. 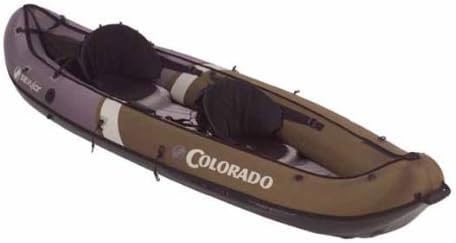 Let’s start with the good reviews. Almost everyone seemed to find the Sevylor Inflatable Colorado Hunting and Fishing Canoe to be a durable, sturdy, compact, lightweight, and comfortable craft, with a lot of legroom. Everyone said it took them only 10 minutes to inflate the canoe, and then they were good to go.

They found it easy to take trips either solo or with their family. One kayaker recommended adding a Sevylor 18SBM motor for anyone who wanted to navigate the water for an hour or so without having to paddle.

The reviewers said the Airtight System and Double-Lock Valves did work. No one complained about leaks and air loss.

The majority of the reviewers stated that they were happy that the canoe came with a manometer and a repair kit, although one seasoned kayaker wasn’t impressed with the repair kit and called it inadequate. He, as well as most of the other reviewers, were satisfied with the Sevylor Inflatable Colorado Canoe’s tracking capability.

Those who gave the canoe only 1 out of 5 stars, however, claimed otherwise. They said they encountered tracking issues with it; they were only able to track properly after loading extra gear in front.

One negative review that everyone seemed to agree on was the inadequacy of the instruction manual. They said the manual lacked useful information. Another complaint was about the difficulty in finding an appropriate pump for the inflatable kayak.

What’s the verdict then? Do we or do we not recommend this inflatable kayak/canoe? The answer is yes. As mentioned earlier, the majority of the reviews were good. It may not be the highest-rated, but with an above-average overall rating of 3.5 stars, we still think the Sevylor Inflatable Colorado Kayak is one of the top inflatable kayaks in the market.